When life gives you a vicious disease at the age of 3 months and the doctors tell you that you won’t make it past the age of 6 years, how do you manage to make it to the age of 30? How do you then cope when your double lung transplant gives you cancer? And how do you continue coping when the disease claims your twin brother?

Clint’s story is a harrowing one of fighting each day for the ultimate dream of all – to keep living!

I breathe with assistance from my oxygen tank; goes with me everywhere

Hi, I’m Clint and I’ve grown up in hospitals. My twin brother and I were diagnosed with Cystic Fibrosis at the age of three months. We have spent our lives inseparable, but now I am left on my own to battle this disease, for it claimed my brother last month and has left my family devastated.

I am currently awaiting my second double lung transplant as I continue to fight against this disease in honor of my brother.

With my disease, the activities I can do are limited. Especially now that I’m on oxygen, I can’t just pick up and go for a hike or play sports or anything. I can only go out for as long as my oxygen tank will last before going empty. I have very limited energy.

I love sports but I can’t participate in them anymore. I used to play hockey, basketball, baseball, you name it. Now, a simple five minute walk leaves me gasping for air.

Me (left) with Curt when we were younger and healthier

I’m pretty used to the symptoms by now, after thirty-years. But, as my health is declining, it’s getting worse and it’s getting harder to cope. I’d describe it as feeling like I’m drowning from the inside.

I live each moment of each day with the feeling of gasping for air like I’m underwater. I’ve only managed to cope with this horrible disease because I was never alone I’ve had a loving partner going through this war with me.. My family and friends have always supported me and have always picked me up when I’ve felt down.

Me (second from left) with my two brothers and father

I received my first set of new lungs at Toronto General Hospital and that is also where I’ll be having my second transplant. Before that surgery, I was really sick, but not as sick as I am this time. I was younger and in better shape than I am now.

My lung percentage went down to 30 percent when I was 22, so I moved to Toronto in June 2005 since that’s where the hospital is. I was put on a waiting list for new lungs. In the meantime, I was given medications to see if they could make me better – but none of it worked.

I got my new lungs on August 14, 2006. Within a month after my transplant, I was diagnosed with post-transplant lymphoma disorder (PTLD), which simply means my new lungs got cancer. 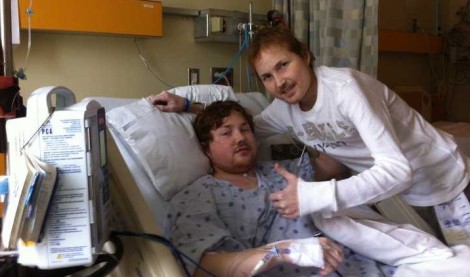 Curt supporting me when I was in hospital

At first when I found out, I was ready to die. Honestly, I felt like I had had enough. The life expectancy for Cystic Fibrosis is not very good and I had never expected to even make it this long. Doctors had told us that we weren’t going to make it past the age of six. But, with this disease, you learn to always be prepared for bumps in the road and obstacles that need to be overcome.

Like everything else, I managed to find strength and somehow battled through the cancer. I had chemo treatment for two months at the Princess Margaret Hospital in Toronto and the tumors stopped growing.

My lung percentage went down to 30 percent again after the chemo and remained stable at 30 percent until last year when they declined to 22 percent. This makes me now need oxygen at all times, meaning I have to wear an oxygen tank and breathe through tubes leading into my nose everywhere I go.

Enjoying a trip to Niagara Falls

A twins’ connection is not easy to explain. We could read each other’s minds. He was my other half. My soul mate. We look alike, sound alike, think alike – we are two peas in a pod. He is the strongest person I have ever known and will ever know! 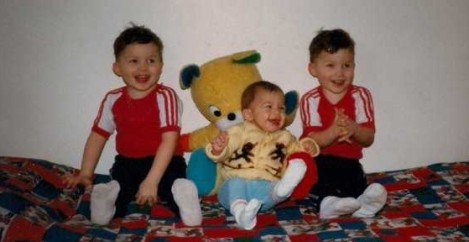 He had a double lung transplant, liver transplant – and my dad gave him a kidney. After two years in the hospital, he went back to school and at the same time he worked for my dad. He even managed to graduate with honors and a valedictorian nominee! He proved you can get past anything if you set your mind to it and he changed my outlook on life.

I now feel I have to keep fighting, not only for me but for Curt too. He passed away on June 20, just one month ago, from multiple infections.

Me with Curt in hospital

A Typical Day for Me

A typical day for me includes taking over 30 medications and attending doctor appointments. I also work out three days a week at Toronto General Hospital as part of the transplant program.

Larissa, my fiancé, and I usually have breakfast and dinner together, watch TV, walk our dog – and when we have extra money we might go to movies or a ball game to clear our minds and enjoy ourselves for a bit. I have to be close to the hospital at all times – no more than two hours away – in case I get a call for new lungs. So, I’m basically playing the waiting game.

Our dog helps keep a smile on my face

Larissa and I live together in Toronto in a very small condo within a two minute walk from my hospital. It’s probably the most expensive city in the country and a major culture shock for me compared to the small town I come from in New Brunswick.

Relocating for medical reasons is always expensive because you’re sick and not working. Our one bedroom condo is approx $1600 per month. We also have our other regular bills like car, insurance, phones, groceries, medicine, etc.

Our dog is crazy

Whilst on the waiting list for a transplant, you need to have a support person. This person is not allowed to work and they need to be with you 24/7 to deal with any emergencies that arise. My mother used to be my support person, but now it’s Larissa.

Until last month, Larissa was receiving income from Employment Insurance, but that income has now ended. My church is a true blessing and helps with our rent and TV. But, as for the rest, we rely entirely on donations via my fund-raising campaign with fundanything.com and my own website lungs4clint.org.

Since we have no means of earning any money while I’m awaiting my transplant, it’s these donations that keep us coping. We couldn’t manage without them and we are so grateful to those who are helping! 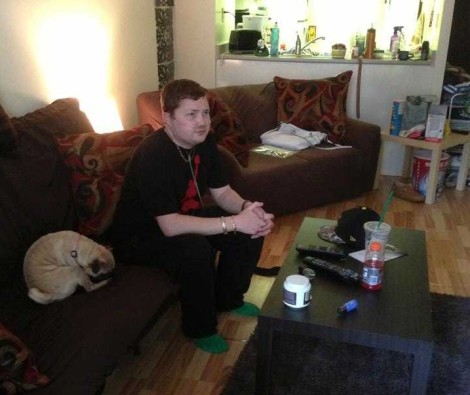 Watching TV in our little condo

Larissa, the Love of my Life

I met Larissa about 11 years ago through mutual friends. We were best friends for years until we started dating. Our anniversary is July 29.

Larissa is very responsible, dedicated, caring and loving. She knows me better than anyone and always outs me first. She was always there for me and took care of me when Curt was sick in Toronto and I was at home worried for him.

She dropped everything and moved up to Toronto with me to be there for me. Without her I’d be a mess! She makes sure I get where I need to be on time. She makes sure I take my insulin, and cooks for me (and she’s pretty good at it). I can’t wait to marry her! 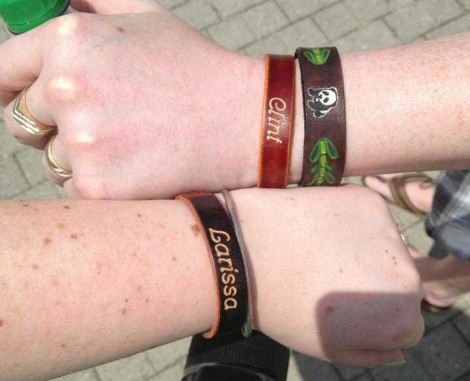 She took Hairdressing and worked at a salon for three years. Then she went to college a second time and took medical reception and transcription before moving up to Toronto. She now has severe carpal tunnel and can barely open a bottle of water. She’s also is getting treatment for thyroid issues, which have her feeling weak and tired all the time.

Even though she has her own health issues, she still takes care of me and puts me first. I’m so blessed and lucky to have her! She’s stood by my side when I needed someone most when Curt passed away. I don’t know what I would have done if she hadn’t been there. She’s the love of my life! 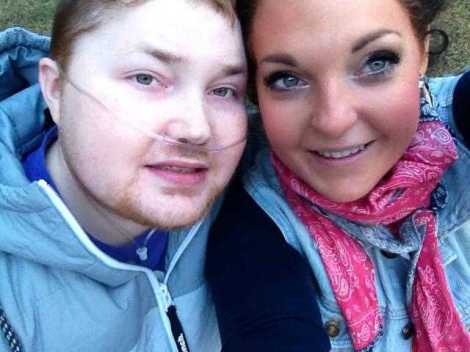 Larissa, the love of my life

Waiting for my New Lungs

Right now, we play the waiting game. The wait time is unknown. It could happen in a day, week, month, year, or longer. The wait list has a lot of people on it right now so it goes by blood type and who’s the sickest, chest size, etc. It’s not a fun life, but we do the best we can and it’s OK because I’m pursuing my dream. I want to fight against Cystic Fibrosis for Curt. And I want to keep breathing.

Clint was able to raise $5,692 with his Fund Anything campaign to help them meet their living needs. He warmly thanks everyone who donated to support him during this difficult time. He still awaits new lungs.

9 responses to “Fight the Drowning Feeling” 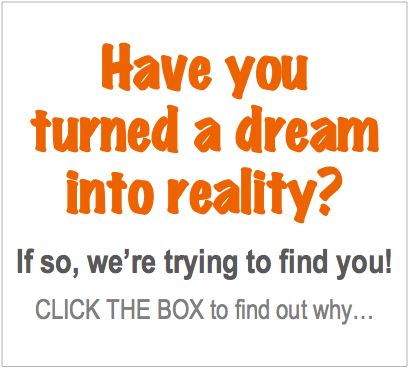 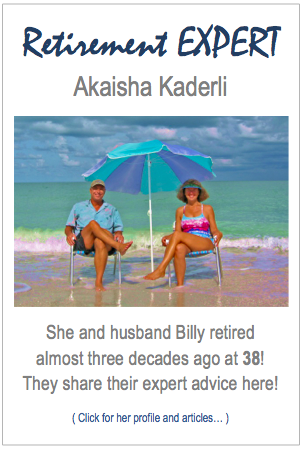